Know About My Choice Packers And Movers In Ramamurthy Nagar Bangalore

From NaMo to PMO: Narendra Modi and his political power on digital media bring Acche Din for the PMO Ministry, attaining digital brand value worth 127 Crores! 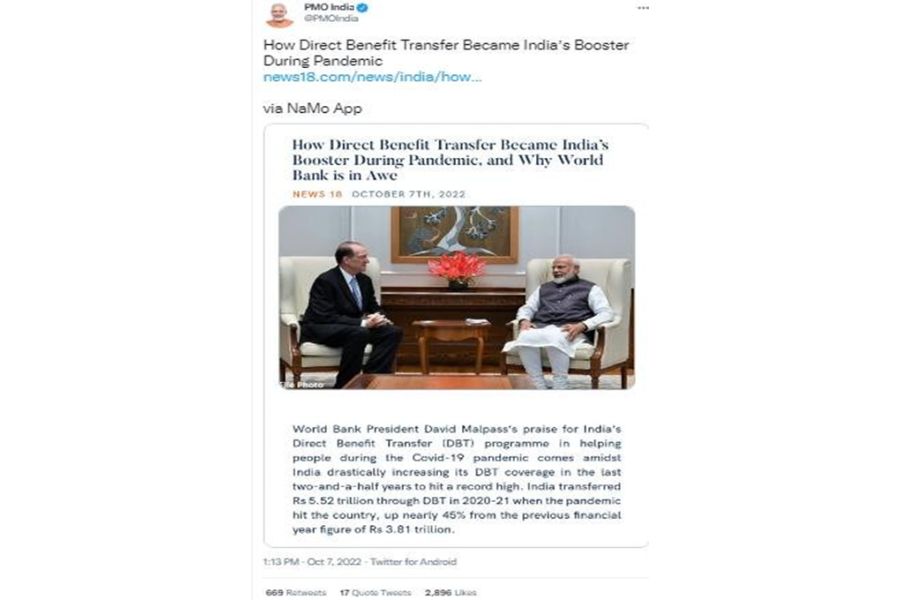 Ministry of Health beats Ministry of Home Affairs, steps one position ahead; The Department of Consumer Affairs has the lowest brand Value: CheckBrand

New Delhi (India), October 21: More than 100 million internet impressions were examined by CheckBrand for this analysis. The Prime Minister’s Office is one of the most prominent and important people on several internet platforms, including Twitter, Facebook, Google search, Wikipedia, YouTube, Instagram, and Google Trends. The ministry has received more than 128.6K engagements across the web.

CheckBrand worked on the data of all ministries extracted from Digital Media for the year 2022. CheckBrand determines that the Prime Minister’s office has topped the list achieving first digital rank with a brand value worth 127 Crores. With 50.9 Million followers on Twitter, more than 15 Million on Facebook and 1.82 Million on YouTube, the ministry has left a mark on social media presence. The audience sentiments of ministry increased to 11.4% positive and have fallen to 8.1% negative. The Prime Minister’s Office enjoys a respectable popularity index in the online arena, and its Twitter handle is always active and engaging.

Following a study of the data on digital media, CheckBrand concluded that tweets with images have more likes as compared to normal content posts. Live videos on Facebook have gained views, and the likes are increasing the presence of the ministry in the digital space.

The irony is that a prime minister is usually famous in the digital world due to the PMO office, but this is the first time the PMO office has gained an online presence due to the current Honorable Prime Minister Shri Narendra Modi. According to the social media pages of the ministry, many tweets of @narendramodi have been retweeted by @PMOIndia, which have gained a lot of engagement.

The PMO has also launched various schemes to build a digitalized Nation, further enhancing its digital presence, such as the Direct Benefit Transfer programme.

The Consumer Affairs Ministry, a critical division that regulates all requirements of customers, has a severely declining digital brand value. Positioned at the very end of CheckBrand’s list of Ministries, the department has acquired the 57th position and a digital brand value of 1 lakhs.

The reason for such depleting brand value is the department’s last interaction with the audience through online mode. The engagement rate is almost null and void with around 126K followers on Twitter and 34K on Facebook. Furthermore, their Instagram account is not verified and is not frequently updated, giving a reason for the downfall in the web world.

The President of India has a 57.87 Crores brand value along with the 2nd digital rank on the CheckBrand list. The ministry was recently in the News for the appointment of new President Droupadi Murmu. The President of India’s office has 19.2 million Twitter followers and 6 million Facebook fans, and it received 31.7% positive and 11.4% negative feedback from the audience.

According to CheckBrand’s data analysis of all 59 ministries, the Brand Values of Ministries have risen to the top of the rankings alongside political figures. With a huge fan following in the digital space, the ministries of the Indian government have marked their all-time high digital rankings.

With 2.1 Million followers on Facebook and 453k on YouTube, the Railway Ministry attains 3rd digital rank. The ministry is impactful in India, with a brand value of 20.36 crore.

The Health Ministry has a highly impressive digital presence. It has 5.9 million followers on Facebook & about 3.1 million Twitter followers. According to CheckBrand, the digital ranking of the ministry is 4th, with a whopping brand value of 19.1 crores.

Ensuring the seamless operation of education, the Ministry Of Human Resource/Education secures the 7th position in the CheckBrand catalogue, with 11Cr Brand Value. Constantly through structured support programmes and processes with the states, Niti Aayog makes it to the Top 10, attaining a Brand Value of 9.19 Crores along with 9th digital rank.

What is amazing to note is that the Ministry of Information and Broadcasting and the Ministry of External Affairs are close competitors with Brand Values worth 6.78 Crores and 6.05 crores, respectively. Standing at 10th and 11th positions on the digital ranking, both ministries have received 7.8% positive audience sentiments.

The Election Commission of India, secures the 14th position getting 1.62 Crores of Brand Value. The Ministry of Sports & Youth Affairs marks its place at 32nd position and has a Brand Value worth

“We have created a platform which can help brands understand their real value in terms of presence on digital media on a real-time basis. We are eager to work with and help them improve their overall digital presence.” Anuj Sayal, MD, ADG Online Solutions and CheckBrand.

CheckBrand, as an AI tool, provides all the inputs required to increase the online engagement of prominent figures and ministries, visibility, and reach to the public. With the assistance of CheckBrand, the Ministry can completely know how to improve its digital ranking and reach the top. CheckBrand examines and gives their Digital Ranking, Brand Value, Brand Score, Sentiment Analysis, and Audience Engagements to ensure their absolute Digital Presence based on the data. Visit https://www.adgonline.in to learn more.

Know About My Choice Packers And Movers In Ramamurthy Nagar Bangalore